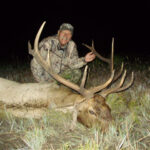 I just want to thank you for a wonderful hunt . This was my second trip to the Floyd Lee ranch and I brought along two of my buddies. We were at the El Rito camp. Although the weather was not he best for the first day your guides and staff worked very hard to get us out and scout for elk. The camp was comfortable and well maintained. The food was great.  The guides worked very hard to put us on elk. Not only did they work hard for their individual clients they also worked as a team after their original client scored. They all worked together skinning and quartering the animal and getting it into their cooler. They also prepared the heads and delivered them to the taxidermist for us.You have assembled a great team and made our trip very memorable. On behalf of Tim, Don and I, I want to thank your staff,Great Cook Stacy, Guides Cody,Tito, Kole and Gadget for making this a very successful hunt we will be talking about for years. We will be sharing our great hunting experience with U S Outfitters with our fellow hunters back home. 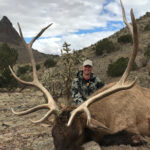 Two days ago I returned home from my rifle bull elk hunt on the Floyd Lee Ranch at the Grande Camp. This was my second hunt with USO on the Floyd Lee Ranch and it will not be my last! Randy was my guide. I had the pleasure of hunting with Randy on my first trip to Floyd Lee last year when I came to USO with a friend. This year I came to the ranch for a solo vacation and was able to hunt with Randy again. During both trips Randy’s knowledge of the area and the elk herd we were hunting is undeniable. Randy took all hunters through safety briefing upon everyone’s arrival at the Grande Camp. During the briefing he informed all the hunters the elk weren’t bugling much because it was late rut so we should all expect to do a lot of glassing to find the elk. Before I get into the details of my particular hunt I should mention there were a couple hunters in camp with limited mobility. This is NOT a problem for USO guides. They do a fantastic job of catering a hunt to the hunter’s specific needs so if a hunter has limitations all the hunter has to do is let their guide know and the guide will accommodate the hunter. Now back to my experience. I’m 46 and in decent shape. I do have a heart murmur which limits my ability to climb hills or run over long periods of time, however, it’s not much of a problem for me as long as I take frequent breaks to catch my breath. I informed Randy of this before we left camp on the first morning of the hunt. We had to do a lot of hiking to find the bull I ending up tagging. Along the way Randy would “check in” with me to see how I was doing, especially during the first couple hours. I could tell he was getting a feel for what my limitations were and this helped us both in the long run because we ended up taking most of the first day to bag the 5 x 5 bull I took home. As the day wore on Randy didn’t have to check with me to see how I was doing because he had already gotten a feel for my limitations earlier in the day. As it turns out my bull was in some very high country with 5 cows. 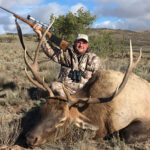 I’ve just returned from my elk hunt at the Grande Camp, and wanted to share a few thoughts with you. I have dreamed about hunting the Floyd Lee with USO since I first became acquainted with you on the Realtree TV shows. It’s still hard to believe it actually happened. My hunt was amazing and the number of elk I saw exceeded my wildest fantasy. The knowledge and team work of the guides collectively was awe inspiring. They seem to know every inch of that ranch and exactly what the elk are doing and where and where they will be and what they are doing. My guide was Rich Halcomb, and I must say I could not have asked for a better guide. His knowledge was amazing and his desire to make sure we experienced a hunt of lifetime was evident. He truly desired to give his clients the best. I would hunt anywhere, anytime with Rich. Adam our cook, also deserves a mention, the food was excellent and he was happy to make sure everyone had anything they desired. I do have a few things that I feel you could improve on, mostly administratively. First, once booked, we rally didn’t hear anything from you. Perhaps a quick email with some info on the camp we are assigned to with some camp pictures/details. For example, we had no idea what was available for meat care. I called the office to ask, and was told meat would be placed in an “ice chest” with dry ice and be frozen. Given that information, and not wanting our meat to be frozen and thawed, we decided to purchase a large chest freezer, and bring it in a trailer . . . it would have changed our decision to know the camps had really nice processing areas with walk-in coolers. Also, I realize the Grande camp is small, but with 8 hunters and 5 guides, 2 sofas and a metal folding chair was a little inadequate. Having said all this, on a overall satisfaction scale of 1-10, I’d rate my experience a 12-13! I would go back in a heart beat. I am planning on calling you after hunting season and discussing some of your draw hunts. 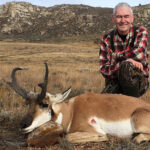 Long way to go but worth every mile and $ spent. USO handles my applications for the North American species and this was my first time to draw, an Antelope tag in Wyoming. Traveled 27 hours non-stop to get there and 24 back from hill billy country in Denmark to southwest Wyoming. USO picked the perfect spot for my first hunt in USA – more to come I hope. Hunted the Q-Creek Ranch and saw 2000 plus Antelope, 2-300 Elk and good numbers of Mule Deer, game rich and well managed. Guides did very well and got me onto a good Antelope the first day, but the rut being on he had a different mondset and followed his beloved one while fighting off the other suitors. Went back the next morning and worked the area – success, took him cleanly at 200 yards. Doesn’t come any better. Spend time with the Antelope giving thoughts and respect to the quarry, the location and that we take the freedom to hunt and harvest. USO and their staff made this happen, can’t wait till 2020 when an Elk should be in the offering – fingers crossed. 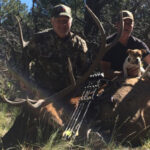 We had a great time hunting the L Bar. The camp is nice and the USO staff is all super friendly. The hot weather hindered the rut and we had to resort to hunting waterholes in the afternoon. I arrowed a bull on day 4. The shot angle was a little steep and we ended up having to track the bull down with Henry and the dogs. That was an adventure in itself.

Thank you George and your entire staff, at United States Outfitters. While I was driving back home to Ohio I had a lot of time to think about my elk hunting experiences. I just wanted to express my gratitude to everyone involved. I’ve hunted for over 40 years and have been successful hunting whitetail deer, pheasant and rabbits. But, nothing compared to my elk hunt at your ranch. I can honestly say that I have been hunting with a more organized, knowledgable and hard-working outfitter than the one you operate. George, I still can’t believe how you and J.R> got together and attended to my car issue and didn’t accept my offer to pay you for your services. That was way over and above what I expected. So, thank you. Adam, you get a special mention for the great breakfasts, lunches and dinners you made including fresh baked pies every day. Your attention to detail in preparing your meals was fantastic. also, I have to mention the cheeseburger you made special for my guide and I when we rolled in about 2:00 in the afternoon. Lunch was over and it was too soon for dinner but you went out of your way to prepare a special meal for the two of us. You even put your homemade red chili on top. It was one of the best cheeseburgers that I’ve ever eaten. So, thank you too. Kevin Davis, my guide, did an impressive job navigating the rough terrain and had me consistently glassing bulls. Even though Kevin is quite a bit older, (10 months) we covered a lot of ground and saw sveral groups of elk. We saw at least 6 legal bulls before I was able to harvest my beautiful 5 x 5. I heard a few of the other hunters took bulls at over 300 and 400 yards which does take skill but I wouldn’t trade my hunt with any of them. Kevin, my guide, did a masterful job at spotting the bull and putting a well thought out stalk on him. He took into account the wind direction and herd speed to put me just where I needed to be to get a good shot on a bull. I was able to harvest my bull at 50 yards. So, I’ll just say I’m pleased with how we were able to outsmart an old bull. So, thank you again George and your crew for a memorable hunt.